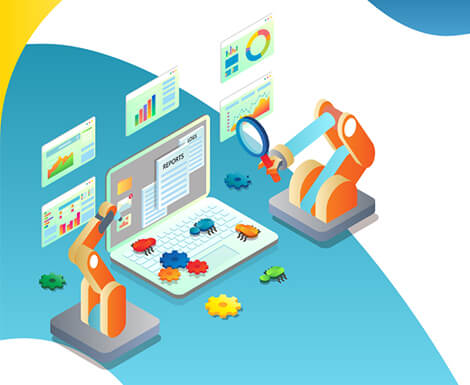 In software testing, test automation is the use of special software which is separate from the software being tested, to control the execution of tests and the comparison of actual outcomes with predicted outcomes. It makes use of special software tools to control the execution of tests and then compares actual test results with predicted or expected results. It automates some repetitive but necessary tasks in a formalized testing process already in place. It can perform additional testing that would be difficult to do manually.

There are two terms, necessary to understand for a clear idea of Test Automation.

It is an approach in which teams produce the software in short cycles, ensuring that the software can be reliably released at any time and, when releasing the software fully, doing so manually. It aims at building, testing, and releasing software with greater speed and frequency. The approach helps reduce the cost, time, and risk of delivering changes by allowing for more incremental updates to applications in production.

Continuous testing is the process of executing automated tests as part of the software delivery to obtain immediate feedback on the business risks associated with a software release. It reduces waiting time for feedback to developers.

Once automated tests have been developed, they can be run quickly and repeatedly thus becoming cost-effective. They are especially helpful in testing of software products that have a long maintenance life.

There are many approaches to test automation: Some points to be noted are:

Five main factors to consider in test automation decision are:

The most frequent individual factors identified are need for regression testing, economic factors, and maturity of SUT.

BrandCrock provide the support and assistance for the following Automation Testing types.

It is a testing framework that generates User Interface events such as keystrokes and mouse clicks, and observes the changes that result in the user interface, to validate that the observable behavior of the program is correct.

It is a testing framework that uses a programming interface to the application, to validate the behavior under test. Typically API driven testing bypasses application user interface altogether.

To check whether various sections of the code are acting as expected under various circumstances.

It is the process of executing automated tests as part of the software delivery pipeline to obtain immediate feedback on the business risks associated with a software release candidate.

BrandCrock GmbH, Munich is a leading professional team taking Agile and DevOps initiatives which design and engineer the handling of most complex automation problems.

We do end-to-end, dynamic testing which in reality is one process, one test, with unlimited variations.

We excel in automated business process of mining and script automation conversion.

We are here to satisfy our clients. Call us, the developers of world’s most complex applications.